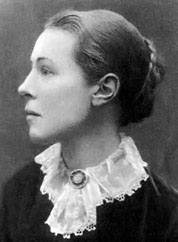 Written nearly a century ago by a fascinating and brilliant woman named Lilias Trotter, these words speak with timeless power and clarity about the need for intentional focus on God and His glory in every aspect of our lives.

Lilias, a highly-esteemed artist born during the Victorian Era in London, was mentored as a young lady by the most respected art critic of her day, John Ruskin. Immensely impressed with her talent, Ruskin wrote that she could be the “greatest living painter and do things that would be immortal.”

But even greater than her love of art, was Lilias Trotter’s desire to serve others for God. She chose to set aside art as a passion and keep it only as recreation. Instead of an art career, her full time commitment became missionary service. She worked the streets of London for the YWCA and later raised her own funding to go to Algeria as a missionary to the Muslims for over 38 years.

It was in a little wood in early morning. The sun was climbing behind a steep cliff in the east, and its light was flooding nearer and nearer and then making pools among the trees. Suddenly, from a dark corner of purple brown stems and tawny moss there shone out a great golden star. It was just a dandelion, and half withered - but it was full face to the sun, and had caught into its heart all the glory it could hold, and was shining so radiantly that the dew that lay on it still made a perfect aureole round its head. And it seemed to talk, standing there - to talk about the possibility of making the very best of these lives of ours.

For if the Sun of Righteousness has risen upon our hearts, there is an ocean of grace and love and power lying all around us, an ocean to which all earthly light is but a drop, and it is ready to transfigure us, as the sunshine transfigured the dandelion, and on the same condition - that we stand full face to God.

Gathered up, focused lives, intent on one aim - Christ - these are the lives on which God can concentrate blessedness. It is "all for all" by a law as unvarying as any law that governs the material universe.

We see the principle shadowed in the trend of science; the telephone and the wireless in the realm of sound, the use of radium and the ultra violet rays in the realm of light. All these work by gathering into focus currents and waves that, dispersed, cannot serve us. In every branch of learning and workmanship the tendency of these days is to specialize - to take up one point and follow it to the uttermost.

And Satan knows well the power of concentration; if a soul is likely to get under the sway of the inspiration, "this one thing I do," he will turn all his energies to bring in side-interests that will shatter the gathering intensity.

And they lie all around, these interests. Never has it been so easy to live in half a dozen good harmless worlds at once - art, music, social science, games, motoring, the following of some profession, and so on. And between them we run the risk of drifting about, the "good" hiding the "best" even more effectually than it could be hidden by downright frivolity with its smothered heart-ache at its own emptiness.

It is easy to find out whether our lives are focused, and if so, where the focus lies. Where do our thoughts settle when consciousness comes back in the morning? Where do they swing back when the pressure is off during the day? Does this test not give the clue? Then dare to have it out with God - and after all, that is the shortest way. Dare to lay bare your whole life and being before Him, and ask Him to show you whether or not all is focused on Christ and His glory. Dare to face the fact that unfocused, good and useful as it may seem, it will prove to have failed of its purpose.

What does this focusing mean? Study the matter and you will see that it means two things - gathering in all that can be gathered, and letting the rest drop. The working of any lens - microscope, telescope, camera - will show you this. The lens of your own eye, in the room where you are sitting, as clearly as any other. Look at the window bars, and the beyond is only a shadow; look through at the distance, and it is the bars that turn into ghosts. You have to choose which you will fix your gaze upon and let the other go.

Are we ready for a cleavage to be wrought through the whole range of our lives, like the division long ago at the taking of Jericho, the division between things that could be passed through the fire of consecration into "the treasury of the Lord," and the things that, unable to "bide the fire" must be destroyed? All aims, all ambitions, all desires, all pursuits - shall we dare to drop them if they cannot be gathered sharply and clearly into the focus of "this one thing I do"?

Will it not make life narrow, this focusing? In a sense, it will - just as the mountain path grows narrower, for it matters more and more, the higher we go, where we set our feet - but there is always, as it narrows, a wider and wider outlook, and purer, clearer air. Narrow as Christ's life was narrow, this is our aim; narrow as regards self-seeking, broad as the love of God to all around. Is there anything to fear in that?

And in the narrowing and focusing, the channel will be prepared for God's power - like the stream hemmed between the rock-beds, that wells up in a spring - like the burning glass that gathers the rays into an intensity that will kindle fire. It is worthwhile to let God see what He can do with these lives of ours, when "to live is Christ."

Turn full your soul's vision to Jesus, and look and look at Him, and a strange dimness will come over all that is apart from Him, and the Divine "attrait" by which God's saints are made, even in this 20th century, will lay hold of you. For "He is worthy" to have all there is to be had in the heart that He has died to win.


© Live at the Well
Permissions: You are permitted and encouraged to reproduce and distribute this material in any format provided that you do not alter the wording in any way and do not charge a fee. Any exceptions to the above must be approved by Live at the Well.
Please include the following statement on any distributed copy: By Kelly Mowrer. © Live at the Well.