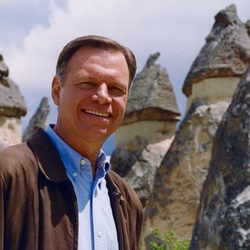 From 1991-2004, Pastor Finley served as Speaker/Director of the international Bible study television program It Is Written, airing on multiple networks around the world including Trinity Broadcasting Network and the Hope Channel. He currently holds the title of Speaker Emeritus for the ministry. He then was called to serve as a vice president for the General Conference of the Seventh-day Adventist Church, general field secretary, and director of the Center for Global Evangelism, until his retirement.


Pastor Finley draws from his years of experience in pastoral work to reach people from all walks of life. He and his wife have conducted more than 100 evangelistic series that have spanned the globe, and his sermons have been translated into 50 languages. In his efforts to reach people all over the world, Pastor Finley became a pioneer of satellite evangelism technology. As a result, millions attended his satellite evangelistic campaigns, NET '95, NET '96 and ACTS 2000. Finley has written more than 70 books, produced 16 video series, and regularly contributes articles to numerous periodicals.