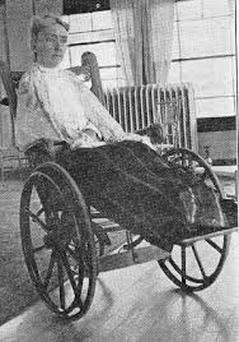 Her hands were so gnarled by arthritis that she was unable to hold a pen - a crayon or stick of chalk was wedged between her fingers so she could write on a surface suspended over her bed.  She had hoped to become a concert pianist, but in her late twenties she was diagnosed with arthritis.  By the end of her life she was just four feet tall.

Some of the most inspiring hymns ever written were composed by People of the Yielded Heart - during times of trial and suffering, or whose lives were continually marked by great tragedy. They found Him alone as their peace, their comfort and daily companion.

Annie experienced such a life.

She was born in Vineland, New Jersey on Christmas Eve, 1866.  He mother died giving birth to her baby sister. She was four years old that day. By the time she reached six years old Annie's father died from an incurable disease. A Christian family later adopted the two girls, raising them in the discipline and instruction of a Christian home. They loved them as their own.

Annie flourished in this new home  and recognized how fortunate she was to be loved by the Flint family. She met the Lord at a Methodist revival meeting and continued to grow in the Spirit. She developed a love for poetry and aspired to be a composer and concert pianist. Annie was thrilled the day she realized she could express herself in verse.

Annie was a pretty girl, her dark eyes were bright against her clear olive complexion and her black hair fell in curls around her lovely face. She was kindhearted and those around her enjoyed her presence. She was self-reliant, independent and economical too. She sewed her own dresses and was a capable housekeeper.

She graduated from high school and went on to pursue a career as an elementary school teacher. In her second year, she was afflicted with arthritis. At home she was the care giver for her ailing adopted parents. A few months after her diagnosis they died. She was left alone with her sister, again.

Annie’s arthritis grew steadily worse, to the point that she was unable to walk. She visited doctors only to receive the verdict that she would become a helpless invalid. Later in life, she was unable to open her hands and could no longer write but continued to compose many of her poems on a typewriter using her knuckles. From this grief-stricken life, one marked by great suffering and loss, was born hymns that bless people around the world even to this day. Her verses provided solace in her long hours of suffering.

Her words were placed in gift books and card publishers printed them in their greeting and Christmas cards. In 1919, she published her first book of poems, By the Way, Travelogues of Cheer. Annie would be the first to tell you she sought healing, but in the end she was thoroughly convinced that God intended to glory Himself through her, in her weak, earthen vessel.  Her personal life verse was: "My grace is sufficient for thee: for My strength is made perfect in weakness."

Her words have an unusual appeal to the human heart and reflects her love for God. She felt what she wrote and out of her suffering she was able to comfort others with the comfort she received from The Comforter.

On September 8th, 1932, she felt very tired and slowly moved into eternity. Sorrow, pain, and suffering were forever gone. She is buried in Clifton Springs, New York.

We may wonder at the mystery of pain and suffering for those in Christ and even try to explain it. But the truth is the answers are hidden in Christ and glorified in those who obey Him. The yielded heart knows The Potter makes no mistakes as He molds the clay in His hand. He's fashions His masterpiece into a vessel prepared and fit for the Master's use.

Annie Johnson Flint was the clay in His hand and a person of the yielded heart.
He Giveth More Grace

He giveth more grace as our burdens grow greater,
He sendeth more strength as our labors increase;
To added afflictions He addeth His mercy,
To multiplied trials He multiplies peace.

When we have exhausted our store of endurance,
When our strength has failed ere the day is half done,
When we reach the end of our hoarded resources
Our Father’s full giving is only begun.

Fear not that thy need shall exceed His provision,
Our God ever yearns His resources to share;
Lean hard on the arm everlasting, availing;
The Father both thee and thy load will upbear.