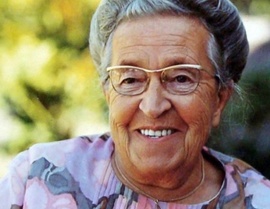 Cornelia "Corrie" ten Boom was born April 15, 1892 in Amsterdam, Netherlands. During World War II, she and her elderly watchmaker father, Casper, and sister, Betsie, opened their home to provide a refuge for their Jewish friends and neighbors. As word spread, they became an active part of the Dutch underground who built a "hiding place" in their home. Helping countless refugees to safety, they were eventually betrayed to the Nazis by a Dutch informant. Their home was raided and the entire family was arrested. The Jews in their home at the time of the raid made it safely to the hiding place and were later assisted to freedom by others. Frail and old, Casper died in prison days after his arrest. Corrie and Betsie were sent to a series of concentration camps, where Betsie also eventually died in the notorious Ravensbruck camp. After the war, Corrie told their story in the book The Hiding Place and toured the world sharing the power of God's love and grace. She died on her 91st birthday, April 15, 1983, in Placentia, California. I first read The Hiding Place when I was a teenager and it opened my heart to a new, and beautiful, and practical picture of a life of trust and faith in God's love. Corrie's words changed my life and I read them often. I hope these quotes bless you as they have blessed me countless times through the years.

​​Never be afraid to trust an unknown future to a known God. -Corrie ten Boom

This is what the past is for! Every experience God gives us, every person He puts in our lives is the perfect preparation for the future that only He can see. -Corrie ten Boom

Worrying is carrying tomorrow's load with today's strength- carrying two days at once. It is moving into tomorrow ahead of time. Worrying doesn't empty tomorrow of its sorrow, it empties today of its strength.    -Corrie ten Boom

Hold everything in your hands lightly, otherwise it hurts when God pries your fingers open.
-Corrie ten Boom

Today, I know that memories are not the key to the past, but to the future.  I know that the experiences of our lives, when we let God use them, become the mysterious and prefect preparation for the work He will give us to do.  -Corrie ten Boom

What wings are to a bird, and sails to a ship, so is prayer to the soul. -Corrie ten Boom

Is prayer your wheel or your spare tire? -Corrie ten Boom

Do you know what hurts so very much? It's love. Love is the strongest force in the world, and when it is blocked that means pain. There are two things we can do when this happens. We can kill that love so that it stops hurting. But then of course part of us dies, too. Or we can ask God to open up another route for that love to travel. -Corrie ten Boom

There are no “ifs” in God's world, and no places safer than any other places.  The center of His will is our only safety – let us pray that we may always know it! -Corrie ten Boom

Trying to do the Lord's work in your own strength is the most confusing, exhausting, and tedious of all work.  But when you are filled with the Holy Spirit, then the ministry of Jesus just flows out of you.
-Corrie ten Boom

Forgiveness is an act of the will, and the will can function regardless of the temperature of the heart.
-Corrie ten Boom

There is no pit so deep, that God's love is not deeper still;  with Jesus, even in our darkest moments, the best remains and the very best is yet to be.
-Corrie ten Boom

Happiness isn't something that depends on our surroundings...It's something we make inside ourselves. -Corrie ten Boom

Dear Jesus...how foolish of me to have called for human help when You are here. -Corrie ten Boom

It is not my ability, but my response to God’s ability, that counts. -Corrie ten Boom

When we are powerless to do a thing, it is a great joy that we can come and step inside the ability of Jesus.
-Corrie ten Boom

There is no panic in Heaven! God has no problems, only plans. -Corrie ten Boom

If God has shown us bad times ahead, it's enough for me that He knows about them. That's why He sometimes shows us things, you know - to tell us that this too is in His hands. -Corrie ten Boom

God's viewpoint is sometimes different from ours - so different that we could not even guess at it unless He had given us a Book which tells us such things....In the Bible I learn that God values us not for our strength or our brains but simply because He has made us. -Corrie ten Boom

Worry is a cycle of inefficient thoughts whirling around a center of fear. -Corrie ten Boom

Whenever we cannot love in the old, human way . . . God can give us the perfect way. -Corrie ten Boom

Perhaps only when human effort had done it's best and failed, would God's power alone be free to work
-Corrie ten Boom

Forgiveness is the key that unlocks the door of resentment and the handcuffs of hatred. It is a power that breaks the chains of bitterness and the shackles of selfishness. -Corrie ten Boom

When I try, I fail.  When I trust,  He succeeds. -Corrie ten Boom

Life is but a Weaving (the Tapestry Poem)

My life is but a weaving
Between my God and me.
I cannot choose the colors
He weaveth steadily.

Oft’ times He weaveth sorrow;
And I in foolish pride
Forget He sees the upper
And I the underside.

Not ’til the loom is silent
And the shuttles cease to fly
Will God unroll the canvas
And reveal the reason why.

He knows, He loves, He cares;
Nothing this truth can dim.
He gives the very best to those
Who leave the choice to Him.
-Corrie ten Boom

And our wise Father in heaven knows when we're going to need things too. Don't run out ahead of Him.
-Corrie ten Boom

Faith is like radar that sees through the fog -- the reality of things at a distance that the human eye cannot see. -Corrie ten Boom

When a train goes through a tunnel and it gets dark, you don’t throw away the ticket and jump off. You sit still and trust the engineer. -Corrie ten Boom

You have to learn to see things in the right proportions. Learn to see great things great and small things small. -Corrie ten Boom

We are up against the unseen power that controls this dark world and the spiritual agents are from the very headquarters of evil. Therefore, we must wear the "whole armour of God," that we may be able to resist evil in its day of power, and that even when we have fought to a standstill, we may still stand our ground.
-Corrie ten Boom

We never know how God will answer our prayers, but we can expect that He will get us involved in His plan for the answer. If we are true intercessors, we must be ready to take part in God’s work on behalf of the people for whom we pray. -Corrie ten Boom

If God sends us on strong paths, we are provided strong shoes. -Corrie ten Boom

If the devil cannot make us bad, he will make us busy. -Corrie ten Boom

He uses our problems for His miracles. This was my first lesson in learning to trust Him completely.
-Corrie ten Boom

And here I felt a strange leaping of my heart-God did! My job was to simply follow His leading one step at a time, holding every decision up to him in prayer. -Corrie ten Boom

Your love in me is stronger than the hatred. -Corrie ten Boom

His will is our hiding place. Lord Jesus, keep me in your will! Don't let me go mad by poking about outside of it. -Corrie ten Boom

I know that the experiences of our lives, when we let God use them, become the mysterious and perfect preparation for the work He will give us to do. -Corrie ten Boom

To forgive is to set a prisoner free and discover the prisoner was you. -Corrie ten Boom

Books do not age as you and I do. They will speak still when you and I are gone, to generations we will never see. Yes, the books must survive. -Corrie ten Boom

The measure of a life, after all, is not its duration, but its donation. -Corrie ten Boom

Thou art my hiding place and my shield: I hope in Thy word. . . . Hold Thou me up, and I shall be safe. -Corrie ten Boom

This is what the past is for! Every experience God gives us, every person He puts in our lives is the perfect preparation for a future that only He can see. -Corrie ten Boom

Everyone needs the Holy Spirit to understand spiritual truths. I found that when we taught the Gospel in an uncomplicated way the Holy Spirit did not need a high I.Q. to reveal Himself. -Corrie ten Boom

Perhaps only when human effort had done its best and failed, would God’s power alone be free to work.
-Corrie ten Boom

When He tells you to love your enemies, He gives you the love that He demands from you.
-Corrie ten Boom

Of course it was not my wholeness, but Christ’s, that made the difference. -Corrie ten Boom

We must be so careful that we do not refuse the cross that the Lord has given us to carry. Let us remember that our present sufferings serve to prepare us for entering into the Kingdom of the Lord Jesus Christ.
-Corrie ten Boom

Whatever in our life is hardest to bear, love can transform into beauty. -Corrie ten Boom

What I spent, I had; what I saved, I lost; what I gave, I have. -Corrie ten Boom

My job was simply to follow His leading one step at a time, holding every decision up to Him in prayer.
-Corrie ten Boom

I've never met anybody who said that they were sorry that the Lord Jesus had entered their hearts.
-Corrie ten Boom

You will find it necessary to let things go, simply for the reason that they are too heavy.
-Corrie ten Boom

God takes our sins – the past, present, and future, and dumps them in the sea and puts up a sign that says "No Fishing Allowed". -Corrie ten Boom

Don't pray when you feel like it. Have an appointment with the Lord and keep it.  A man is powerful on his knees. -Corrie ten Boom

Worry is like a rocking chair: it keeps you moving but doesn't get you anywhere. -Corrie ten Boom

Now I know in my experience that Jesus' light is stronger than the biggest darkness. -Corrie ten Boom

Who can add to Christmas?  The perfect motive is that God so loved the world.  The perfect gift is that He gave His only Son.  The only requirement is to believe in Him.  The reward of faith is that you shall have everlasting life. -Corrie ten Boom

Be united with other Christians.  A wall with loose bricks is not good.  The bricks must be cemented together.
-Corrie ten Boom